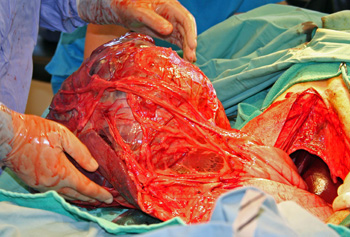 Krieger wasn ™t feeling well last May. His appetite was off and he was a little slow, but nothing more specific than that. Examination and full labwork were both normal. He never really got back to his usual self, but he seemed to be doing okay. Since Krieger is a long-haired German Shepherd, his owners didn ™t notice that he was losing some fat coverage over his ribs and his belly was slowly enlarging. By mid-October it was clear there was a large mass in his abdomen. When ultrasound revealed that this mass was coming from his spleen, the owners asked me to remove it. Despite a high chance for complications, the surgery went smoothly and an 18 lb tumor was removed – that was about 20% of Krieger ™s body weight! He is doing very well now, just 2 days post-op.

50% of splenic masses in dogs are benign. The other 50% are usually very aggressive cancers called hemangiosarcoma. If Krieger ™s mass was malignant, he will likely die of metastasis within 6 months. Because this mass got to be so big without bleeding and because we saw no signs of spread at surgery, we feel this will probably be a benign hematoma and Krieger will be cured. This was a big and ugly disease, but that doesn ™t mean bad disease. This owner ™s willingness to do good diagnostics and surgery has most likely saved Krieger ™s life. I ™m sure Krieger is glad she didn ™t give up just because things looked œugly. 