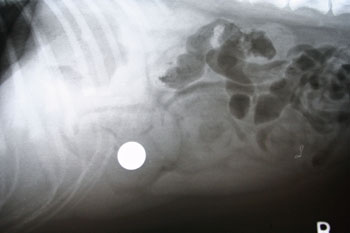 Aspen came to see our Dr. Tao a few weeks ago because she was lethargic. Aspen is a 7 month old Golden Retriever who had been lethargic with vomiting and diarrhea after eating some underwear (which she was able to pass on her own!) This time she had gotten into some clothing, but there was no vomiting or diarrhea. Her examination was normal except for the depression. Dr. Tao was concerned about many possible problems including infectious diseases, poisoning and ingestion of a foreign object. A few blood tests and an x-ray later, we could see the culprit. There was a metal object that looked like a coin and another that appeared to be a staple in Aspen ™s gastrointestinal tract. Dr. Evans was in charge of surgical procedures that day, so she explored Aspen ™s abdomen. A penny was found in Aspen ™s stomach and was easily removed. Luckily, our doctors were able to remove this penny before it entered the intestines where it would have caused great pain and potentially rupture. Aspen is doing great today.

Ingestion of foreign bodies is extremely common among young dogs, but also occurs with cats and older dogs (and people!) Youngsters should be denied access to potential foreign objects (including landscaping rocks) by using a crate, keeping the house clean, picking up children ™s toys and keeping the trash out of reach. If your pet may have eaten something œspecial , don ™t wait for it to get sick. See your vet right away.