Animals In The News!

Animals In The News!

There are so many interesting news stories out there about pets and other animals, veterinary medicine or other animal related topics!  Each week we’ll be gathering some stories that might be interesting to you, so keep posted each week for new stories!

I’ve seen so many news stories recently that focus on animal behavior and the human-animal bond.  I just didn’t want to wait to long to share them with everyone, so enjoy! 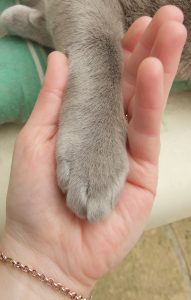 I Sniff, Therefore I Am.  Are Dogs Self-Conscious? This article explores self-awareness in the animal kingdom and how it varies between human, apes and down the line to dogs.  We all have our own thoughts on this idea.  Well it has been tested various ways and among them the mirror test.  See what scientists have found out so far.

Wall-E on ‘GMA’: How You Can Adopt a Dog A particular story of a puppy spurs thousands of people to write and try to adopt it.  This story highlights how many great dogs (and cats) are in need of homes waiting patiently in shelters across the U.S.

Prehistoric Dog Lived, Died Among Humans Researchers found evidence of human-dog interaction in prehistoric times based on the remains of a male dog in Siberia.

Special-Needs Pets Will Enrich Your Lives With Love This article enforces our own Stephanie Ruggerones article from a couple weeks ago.  No different than with people, just because a pet’s body doesn’t function “normally” has nothing to do with the amount of love they give back to us!

UC Davis vets’ online survey asks about cats and kids Previous research has shown that cats have a calming influence on people.  UC Davis veterinarians are currently conducting a survey about the relationship between cats and children.  For more information and to take part in the survey, check out this story.

Man and a goose form unlikely friendship Maria the Tolouse goose waits every day for her human friend Dominic Ehrler at Echo Park, California.  She is very protective of her friends.  She even seems to have affinity for rock stars as she wouldn’t leave the members of the band Ok, Go alone during a filming of a music video.  Instead of fruitlessly attempting to remove her from the scenes she became one of the stars of the video.

Cats Adore, Manipulate Women Regardless of the sex of the cat, a study has shown that the dynamics of cat-human relationships are almost identical to human only bonds.  This is especially true when the human involved is a woman.