Woody has been with Animal Care Clinic since August 2011.  When starting with us he was attending school at Cal Poly.  He will be graduating in June with a Bachelor’s in Animal Science.  Woody has worked on the lodging team, though now can be found mostly on our veterinary nursing team.  He is one of those easy going kind of guys that can alway be found smiling and ready to lend a helping hand. 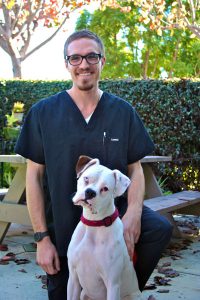 He currently lives with his girlfriend Jessica and their 2 dogs and a sulcata tortoise named Buddha.  Olive is a boxer he adopted from SLO Animal Services, a little shy at first but full of personality!  Della is a terrier mix who has earned the nickname of “terriorist,” since she make look very sweet and innocent but has a mind for trouble!  Woody especially enjoys camping in Big Sur and hiking in and around San Luis Obispo, especially Bishop’s Peak and Irish Hills.  After graduation we will be sad to be losing Woody as he and Jessica move on towards their next big adventure in Georgia!  They will both be moving to Americus, Georgia to work in the chicken industry.  We will look forward to hearing about their adventures in the deep South!