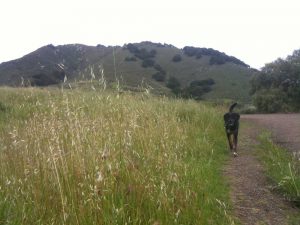 Spring seems to have arrived on the central coast!  We ™ve got green hills, wildflowers blooming, beautiful weather, and longer days.  With spring comes a potentially serious hazard for our four-legged friends that we call foxtails.  Foxtails are a term we use to describe the dried up prickly plant material that likes to stick to our socks.  The problem with foxtails is that they also are very attracted to dogs and cats and they tend to only travel in one direction because of their barbs.  We commonly take foxtails out of the ears, eyes, noses, and from in between the toes of dogs, and sometimes cats.  We ™ve already had our first few of the year!  It may be very green out there still, but beware the foxtails are lurking.  Because we had so much rain this year, there is a lot blooming, which means a lot that will dry out and be potential hazards for our pets.  Below is some information on the most common problems we see from foxtails

Signs that your pet may have a foxtail in their ear include a sudden onset of intense head shaking, holding their head tilted to the side, or crying out if their ear is touched.  These are all very similar signs to an ear infection, and sometimes it can be difficult to distinguish one from the other.  One of our doctors will need to look down the ears, which most pets don ™t particularly like.  If there is a foxtail in an ear, often times, we need to sedate the animal to safely remove it without damaging the eardrum.

Animals that have foxtails in their eyes usually are squinting, rubbing at their eyes, and have discharge from their eyes.  Our doctors will usually put a drop of a medication that will numb the eye so that we can more easily look under the eyelids and remove any foxtails.  Often the foxtail has rubbed across the cornea, causing some damage to it, so most animals will go home with eye medications.

Foxtails that make their way up a dog ™s nose can be quite frustrating! Some make it very obvious by sneezing very violently, constantly and having bloody discharge.  Others may do this initially and then stop sneezing, it can be hard to tell if they sneezed out the foxtail or if it is just lodged in a spot that isn ™t bothering them enough to cause sneezing.  The doctors have a few tricks to help them try to decide if there really is something still in the nose.  Dogs will need to be sedated, and often fully anesthetized, to be able to look up their nose and remove any foxtails.  Even then, sometimes it can be very difficult to see that it has all been removed because there can be a lot of inflammation and blood up the nasal cavity.  Some dogs may have to be anesthetized a second time to look up their nose again if their symptoms don ™t improve.

Long- haired dogs often get foxtails stuck in the hair between their toes, and then they like to start to burrow into their skin.  They can make some pretty yucky infections and can sometimes be difficult to find because they can migrate around through different tissues.  These patients will often need antibiotics and potential follow up visits.

So be careful when out hiking for lurking foxtails.  You may even want to feel between the toes to make sure there are none hitchhiking and to remove them before problems arise.  If you notice any of the previously mentioned symptoms with your four-legged friend, don ™t hesitate to call or come by and we will come up with a plan to remove those pesky foxtails!