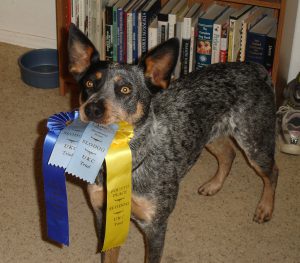 For those of you who read last week’s blog, you know that Mico and I were showing in obedience this weekend at the SLODOG United Kennel Club Show in Santa Maria.  Good news to report- Mico and I did well and received the last qualifying score we needed for him to earn his United Companion Dog Title!  We received the highest score we’ve gotten since we started showing a year ago.  Because his title was finished, I showed him once more this weekend just for the practice.  In this picture you’ll see him showing off his ribbons!  The small blue ones are the most important-they mean that we received a qualifying score.

Now that Mico is done with his United Kennel Club Novice title, we’ll be working on finishing the equivalent in the American Kennel Club.  We will show at the San Luis Obispo Kennel Club Show at the Paso Robles Event Center the 3rd weekend in November.  We need one qualifying score there to finish his Companion Dog Title (CD).  Then we’ll spend the winter perfecting the skills we need to show in 2011 in the Open classes.

We hope everyone enjoyed the weekend and did something fun with their dogs, like Mico and I did!  And hopefully managed to stay cool, too!