Dawson before his leg amputation

The first day I met Dawson, I knew that he was a special patient. And I knew that his owners were very committed to his care and comfort. Dawson first came to see me at the beginning of March 2010. He had been diagnosed with a tumor in his left humerus, the bone between his shoulder and elbow. The tumor in his bone was very painful, and he was limping a lot. After consultation with a veterinary oncology (cancer) specialist, it was decided that Dawson would benefit from having his leg amputated in order to eliminate the source of pain. This was a very difficult decision for Dawson ™s owners, as they were concerned about how he would adjust to walking on three legs and whether he’d maintain his enthusiastic spirit & a high quality of life. But on their visit to the oncologist office, they saw another dog, approximately Dawson’s age & size, walking around energetically on only three legs (same front leg missing that Dawson would have amputated). They were so impressed with how happy that dog was without being in pain and how quickly the dog had adapted, that they made the decision to have Dawson ™s leg amputated. 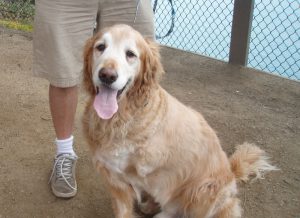 Dawson after his leg amputation

Dawson did amazingly well after his amputation. With the pain of his tumor gone, he was a much happier dog! He still could run around, play in the water, play with his family, fetch his ball and play tug-of-war. Amazingly, three weeks to the day after his amputation he was even swimming. You could remove his leg, but you couldn’t remove his Golden Retriever desire to play in the water. Though it was likely that Dawson ™s cancer had already spread to his lungs, we treated him with chemotherapy to try and slow the progression of the disease. He handled all six of his chemotherapy sessions well, and never really seemed to suffer any side effects from it.

Dawson ™s owners always seemed very happy with their decision to amputate his leg, because they were able to enjoy his company for several more months without him being in pain. In early June 2010, Dawson began to have decreased energy & ease of breathing from the spread of his cancer to his lungs, and was eventually euthanized on July 1, 2010. Though he only had a few months to live after his amputation, we were all relieved that those months were without pain, and with a high quality of life. And he was always a brave, happy patient. He is a great example of how well our 4-legged-patients do in handling chemotherapy and cancer. They get out of bed every day with a smile and a tail wag, and because they don ™t really know they are sick, they don ™t feel sorry for themselves. They enjoy the simple things in life, something we should all do more of. Thank you to Dawson for reminding us of these things, he will be missed, but always fondly remembered by all of us. 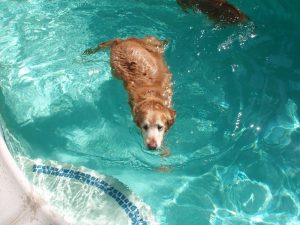 Dawson swimming in pool with 3 legs