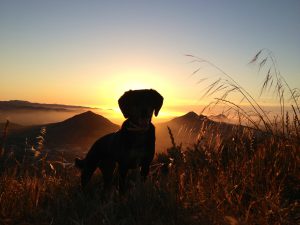 Yesterday evening I took a gentle after-work stroll at Johnson Ranch.  The fields were full of deep purple sweet peas, yellow and lavender lupines, and . . . foxtails.  Millions of them.  Billions of them.  All gently waving in the breeze, just waiting to catch a ride on a dog directly into my exam room.

Foxtails are insidious little plant awns shaped like an arrow.  Unfortunately, they work in same way as an arrow; they go in one way, and they don’t come back out.   They have microscopic little barbs all over them, so they bore their way in one direction and do not back up at all. 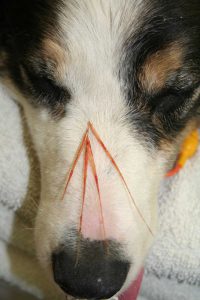 Most often, these little monsters work their way in between toes, under eyelids, into noses and down ear canals.  Less often but more devilishly, they work their way into lungs and all around underneath the skin.

They generally create havoc wherever they travel.  They carry bacteria with them and create an infection in ears and between toes, they scratch the surfaces of eyes, and nettle the inside of noses.  They have to be manually retrieved in order to relieve symptoms, which can require a veterinarian’s help and tools, and sometimes can be fairly extensive.

While a foxtail incident is not always avoidable, there are some things you can do to reduce your chances of having to experience the woe of the foxtail.

Good luck out there pet owners, and I hope you can manage to get through this foxtail season scot-free!