You Be the Vet! Brewster's Jaw Wound

You Be the Vet! Brewster's Jaw Wound

Brewster, a neutered male, 2 year and 7 month old dachshund was brought to us a day after getting adopted from Animal Services.  Brewster presented to Dr. Tao as a healthy young dog.  The only concerns at this time was a slight cough, which could have been from either an upper respiratory infection or irritation of the trachea tube placed during the neuter from 2 days previous.  A small wound was noted in the chin area (below mid mandible) and the owner was recommended to keep an eye on it and if not healing we could try a course of antibiotics.

The wound on Brewster ™s chin was not healing and so he was given some antibiotics.  Even with a round of antibiotics the wound had not healed.  Brewster came in for an appointment with Dr. Markoff to reassess the wound.  Dr. Markoff noted it looked similar to a foxtail tract.  A slide of the wound discharge revealed no bacteria and mostly some round cells.  The wound was probed with no foreign body found inside.  We cleaned the area after taking a culture and then sent Brewster home on a different antibiotic.  The culture revealed nothing that the antibiotics shouldn ™t take care of.  The wound continued to swell up and go back down.  The next step was to bring Brewster in for anesthesia and take a dental x-ray of the area. 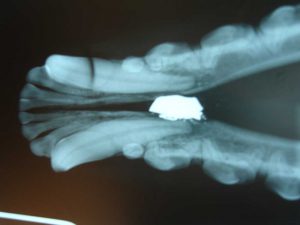 Brewster came in and was put under anesthesia and a dental x-ray taken.  The image clearly shows that there is some foreign object between the mandible bones.  What do you think it is?