Natalie has been with Animal Care Clinic as a part of the Customer Service team since January of 2012. Originally from Fresno, Natalie is a California native, though she has also previously lived in New Hampshire and Washington states. She most enjoys spending time with her two children. Currently, a rosy boa snake named Stripes and cat named Simpkin, rounds out the household.  Simpkin was adopted from Woods Humane Society.  Natalie also is very interested in keeping up with the latest marine conservation issues and enjoys writing children’s literature.

Most of Natalie’s time is spent keeping up with her kids and their latest activities!  Her son is in his first year attending Cuesta College.  Currently he is setting his sights on becoming a high school history teacher!  Her daughter is very excited to be displaying some artwork at Studio Chaparral – Boutique Hair Salon in San Luis Obispo.  Aside from work and kids, she is really looking forward to spending the summer at the beach! 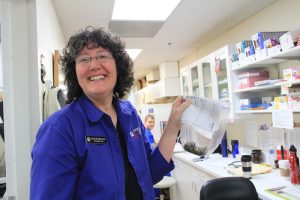