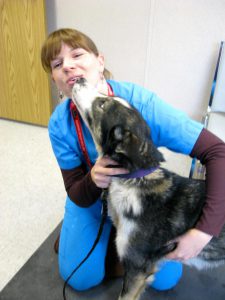 This was my second year volunteering as a vet tech for the Iditarod Trail Sled Dog Race during late February/early March, and another great one it was!  I was most excited to see many familiar faces, including volunteer friends, mushers & dog handlers, and of course the dogs!  The most common question I get is what are the dogs like and how well are they really cared for?  I can report with confidence that the dogs are given a very high level of care to meet their medical, athletic, social and emotional needs.  Meeting all of their needs is the only way to get these athletes to achieve the very high level of performance that we see.  The socialization and love they get also makes them just about the nicest dogs I have met!  Many are ready to flop over for a belly rub at any moment and will happily give many wet kisses in return 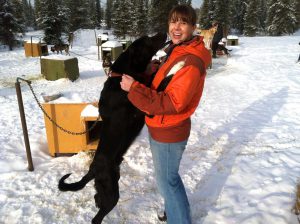 This year I spent a few days in Fairbanks and for the first time experienced temperatures of -20 to -35 degrees Fahrenheit.  Stepping outside you feel your little nose hairs crystallize and carefully take only shallow breaths of the frosty air.  Knowing I had the sun in California to come home to I relished and enjoyed my brief time in true winter!  Our work of collecting blood samples and taking ECG readings of the dogs is all done indoors, so time spent in sub-zero temps was minimal. 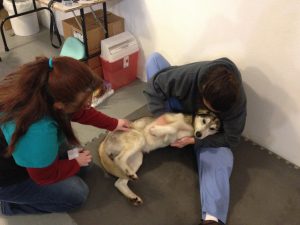 In fact, sled dogs really perform at their peak in temps between 0 and -25 degrees F!  Unfortunately, Mother Nature decided to test this year’s field of dogs and mushers with some challenging weather and conditions.  Iditarod 2013 was an incredibly exciting race right from the beginning!!  New race strategies were tested and the leaders surged and then fell back for a new leader to emerge several times along the 1,000 miles of trail.  Warm temps meant that mushers would rest in the heat of the day and run during cooler times.  Soft, deep snow occasionally meant slow going.  Racers came upon flowing creeks to cross that in cooler years would mean easily crossing over frozen ice bridges.  Temperatures of 20’s, 30’s and even low 40’s were reported along with rain!  Reaching the Bering Sea Coast helped bring the thermostat down but of course also meant plenty of wind.

Battling Mother Nature meant specific adaptations to dog care must be made.  Booties were constantly being placed on dog’s feet to prevent ice crystals from rubbing between toes and causing any abrasions or cuts.  Keeping dogs hydrated is extremely important with cool water in warm temps and warm water in cooler temps along with frozen fish snacks.  Hydration is especially important in the 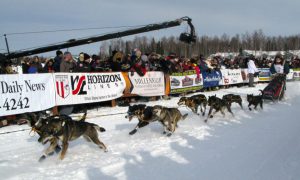 warm weather experienced, along with well-timed run/rest schedules, to keep dogs from getting too warm or over-worked.  Soft snow also tends to give a slight advantage to the smaller dogs with less mass to move compared to the teams with larger dogs.

The teams that put it all together were rewarded with the top finishes.  Mitch Seavey was 2013’s champion.  The now 2-time Iditarod Champion held off Aliy Zirkle (second place for the second year straight) and his own son (last year’s winner Dallas Seavey) to become the oldest champion at 52 years old.   2013 was another year for the record books, for my scrapbook and proof of what makes Alaska an adventure every time I visit!  To check out more pictures of my volunteer adventure click here!  To learn more about the Iditarod check out the Iditarod website.