Radiation therapy is used to treat many forms of cancer in humans and our pets.   Radiation may not cure all cancers, but it can also be used to decrease the size of a tumor, to make future removal less invasive.  It has also been shown to reduce the pain associated with bone cancers. 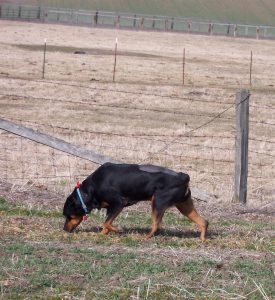 Khy was a dog Dr. Greenberg cared for during treatment. You can see the shaved area on her back, which is the surgical area where as much of her tumor was removed before radiation.

There is a lot of planning that goes into radiation therapy to ensure that the area being radiated can be very focal, thus decreasing the side effects.  Veterinary radiation oncologists do this planning.  The specialist not only decides on the area that will be radiated, they also decide on how often the treatments will be done and what level of radiation the patient will get with each treatment.  Some cancers may require higher doses of radiation over a shorter period of time, or lower doses of radiation over a longer period of time.  A radiation oncologist takes factors like the type and aggressiveness of the tumor, the location, and what treatments have previously been performed into consideration when making these decisions.  The most common side effect to radiation is radiation burn, which is the equivalent to very severe sunburn.

Radiation therapy in dogs and cats requires them to be anesthetized, since they aren ™t very good at holding perfectly still for very long.  Though radiation treatments are very short, it would be too risky to do it with them awake.  Sometimes this means that these patients may need to be anesthetized every day for several weeks in a row.  In these cases, very fast acting anesthesia is used and these animals recover very quickly.  Though the idea of daily anesthesia may sound very scary, I can testify through my experience with these patients, that they handle it quite well.

I attended Washington State University College of Veterinary Medicine and worked closely with several dogs that were being treated with radiation.  WSU is one of the few facilities in the Pacific Northwest that can do radiation therapy.  Because of this people came from far and wide to seek treatments for their pets.  As a student, I opened my home to several dogs that came to WSU for treatment from Canada.  These dogs needed daily radiation for over three weeks, and their owners were unable to spend that much time away from their jobs and homes.  So, their dogs came to live with me during that time.  Every day I would drop them off at WSU ™s Veterinary Medicine Teaching Hospital and they would be anesthetized for their radiation.  I would pick them up when I was done with classes for the day.  I was skeptical myself about how they would handle daily anesthesia, but was pleased to learn that they didn ™t seem to care that they had been anesthetized or that they had cancer!  They led completely normal dog lives; hiking and walking with me in the evenings and on weekends, playing with my own dog, swimming, and always loving their meals.  Though their owners missed them while they were away, I enjoyed being their foster home while they received the treatments they needed. 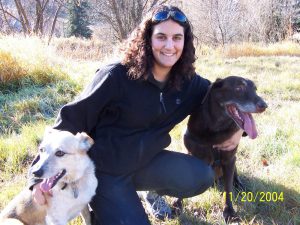 If you have a pet with cancer, and need referral to a veterinary radiation oncologist, please let us know. There aren ™t any facilities locally, but we can help find a referral center that is right for you.