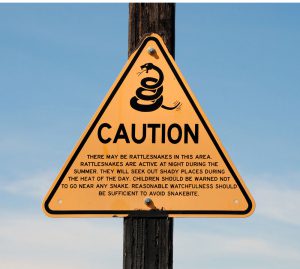 A few weeks ago, I was taking a little post-work stroll at Johnson Ranch.  I came around the corner just in time to see my little terrier dog sniff something at the side of the trail, and then jump away quickly.

I peered into the sagebrush to see what was making him so jumpy.  And then the brush started to rattle.  There it was, a large roll of rattlesnake staring me down and rattling his warning.

Rattlesnakes are pit vipers.  They have long, hollow fangs that inject venom directly into their target.  Their venom contains damaging proteins and neurotoxins that can cause a variety of symptoms.

At the site of the bite, you will see deep bruising, swelling and tissue death.  Dogs and cats may also vomit, become paralyzed, have seizures, and have massive damage to their blood vessels.  They often also have a reduced ability to coagulate their blood.

Veterinarians agree that how well a patient will recover is based on the severity of the bite (how much venom was injected), the species of snake, and how long of a delay there is between the bite and getting to a veterinary hospital.

In addition to hospitalization, one of the main treatments for rattlesnake bites is anti-venom.  These are antibodies against the components of the venom.  They help reduce the severity and progression of the bite.  Most veterinary hospitals don’t carry them because they are too expensive (over $600 per vial!), so pet owners have to pick them up at a human hospital to bring them to the veterinary hospital.

Most dogs and cats can do well after treatment, so long as they are treated aggressively and early.  If your dog or cat has exposure to rattlesnakes, talk to your veterinarian about how to prevent bites and specifically what to do if your dog or cat gets bitten.