Airports, big city traffic and SNOW!  Such were the new experiences Recco encountered recently when he accompanied Dr. Markoff, Nicole Gunkel and myself to Toronto, Canada to attend the annual American Animal Hospital Association conference.  Animal Care Clinic was honored to be one of five finalists for the AAHA Hospital of the Year Award for 2011, so it was off to Toronto in late March while SLO was being drenched in rain.  Luckily, blizzard conditions did not strand us but we did have a few travel delays and extremely COLD conditions for soles used to the central California coast.

While Recco has been exposed to many aspects of daily life that he may encounter as a guide dog in the future, we rarely travel by air and prefer to stay a distance from both big cities and cold weather.  This trip placed him in situations he has never experienced and put lots of his prior training to the test.

We were not overly concerned with the actual air travel, though you never know what may prove overly stressful when raising a guide dog, however œground delays  put poor Recco in a difficult situation.  Getting out of security in our wonderful SLO airport for a potty call was not a problem and so we overcame our first early morning delay easily.  Another delay in SLO put is two hours behind schedule.  Due to our first two delays, and not knowing if we were going to miss our connection, I unwisely passed the opportunity to allow Recco to relieve himself on the tarmac upon arrival at San Francisco.  What happened next?  You guessed it; we had another delay and now were stuck.  Ground delays can be minutes or hours and you don ™t dare stray too far from your gate as they may ask you to board at any time!  Since Recco was acting quite comfortable I still was not too worried.  After an hour we boarded for our five and a half hour flight to Toronto.  The flight was uneventful with Recco sleeping quietly until about forty minutes out from landing.  He was restless but followed my direction to remain down under the seat.  I was relieved when we finally landed but poor Recco was in for more delay!  There was a mix up in the arriving customs terminal and no place for our plane to dock so we sat on the tarmac for another hour.  By this time I was sure Recco would never make it to the great outdoors but continued to ask him to stay down every time he made a move for the aisle.  Once we had deplaned a very nice customs agent opened a special gate for us to be processed.  Now I am smiling as I think we just might make it.  Sending the others to get my luggage, Recco and I headed for the doors only to be stopped by another customs agent wanting my declaration paperwork.  Of course there is only one declaration per family and my husband had ours over in baggage claim.  Forget trying to explain to a customs agent that your dog has not been relieved for over ten hours, they just don ™t care.  I also needed to visit the ladies room but the dog must come first so I found my better half and we finally got outside. 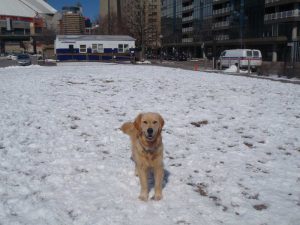 Of course, what we found was cement and snow.  Recco has never seen snow but I took off his guide dog jacket, gave him the secret potty command and watched him for five minutes as his facial expression changed from a grimace to somewhat relaxed to thank goodness that is over! This is why we train them from small pups to relieve on leash, on command and on a variety of surfaces.  During the entire trip Recco consistently eliminated when and where I asked him too, regardless of the activity around him.

In Toronto you can last months without ever going outside in the cold!  The œPATH  is an underground system of walkways and stores that connect all of downtown Toronto.  We felt a bit like moles making our way from our hotel to the convention center the following morning.  Again Recco proved he is guide dog material as he wove through throngs of people and commotion without missing a step.  Revolving doors come in a variety of sizes, and the small ones are not conducive to big dogs with long tails.  He may not have liked the doors but he tackled them anyway, trying to keep his tail from getting caught behind him.

The classes at the convention were a piece of cake as Recco is totally accustomed to lying under a table or desk while I am working.  What proved way more difficult were the several hundred veterinary personnel who were away from their own pets for five days! We all know not to pet a guide dog when it is working but by day number five EVERYONE needed a œdog fix  and Recco ™s head was beginning to swell from all the complements.  During the entire trip we only experienced one negative response to a service dog when a taxi driver at our hotel refused to allow Recco in his car.  Acceptance of these dogs has come a long way since I raised my first guide dog thirty years ago.

We are all glad to be home and there is no place better than San Luis Obispo.  Recco did amazingly well and we are proud of him and his representation of service dogs.  I think if you were to ask him he would say it was OK for a visit but he wouldn ™t want to live there!