Snuffy: my stressed out cat!

Snuffy: my stressed out cat!

I have a confession to make.  I am the owner of 2 very misbehaved cats and one cat who used to be the picture of relaxation and is now the victim of stress and tension that a multi-cat household can bring. 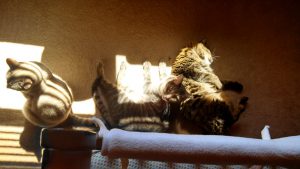 Snuffy is our 9-year-old Manx cat (the kind without the tail).  He was our indoor/outdoor pest control until the neighbor’s dog spooked him into becoming our strictly indoor only cat.  While indoor, he lived peacefully with our two older cats (the late Oreo and Scooter).  He immediately rose to the status of my wife’s favored pet.  Every night he would curl up at the foot of the bed (next to my wife of course) and every morning he would find a comfortable place on the couch.  All was right in Snuffy’s life until his buddies Oreo, and Scooter eventually crossed the Rainbow Bridge.  Amidst the losses we invited two orphaned kittens into our house.  Animal Care Clinic’s Dr. Evans lovingly fostered them until they could live with us.  Snuffy tolerated the kittens but it became clear that his patience was slipping.  Instead of sauntering up and down stairs he would bolt as quickly as he could to avoid “playing” with the kittens (named Umami and Oatmeal).  He became even more attached to my wife and was almost always by her side and would spend a lot of time during the day hiding under our bed.  Our baby daughter was born a year ago, adding to the chaos in Snuffy’s life.  While I didn’t recognize it at the time, Snuffy was becoming more and more stressed in his multi-cat household.

Households with more than 1-2 cats are becoming more and more common.  While we tend to think of cats as being social animals not all cats can integrate well into a group.  Feral cats in the wild are able to just leave one group and go to another if they don’t get along.  Our domestic cats don’t have a choice on their feline roommates.  While they may be able to cohabitate, this doesn’t mean they are friends.  Imagine having a roommate that you didn’t like, but you were not allowed or able to move some place else!!  Cats in these situations experience anxiety and signs can range from very subtle to life altering.  It’s important to recognize the signs of anxiety like hiding, poor appetite, weight loss, and behavior changes.  Call us if you need help bringing peace to your multi cat household.  We love to help!  I’ll talk about what Snuffy did that suddenly made me realize something was up in the next installment.