by Stephanie Ruggerone   Meet Stevie Nicks, an energetic German Shepherd puppy recently acquired by one of

our clients from East Los Angeles German Shepherd Rescue. Stevie was hit by a car and sustained a fractured pelvis and femoral head on her right hind leg. This unfortunate injury lead her to the rescue group and ultimately a surgical procedure called an FHO (Femoral Head Osteotomy).

Stevie was adopted a week post surgery and moved to her new adoptive home in SLO. While the surgery was successful, Stevie did have post surgical swelling, redness and tenderness at the surgical site. As part of her rehabilitation, laser therapy was prescribed by Dr. Markoff to decrease swelling, decrease pain and increase healing at the cellular level. 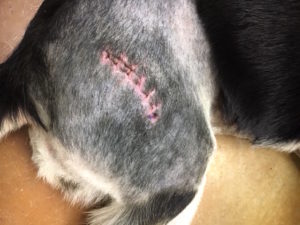 The first photo shows Stevie’s incision one week following surgery and at her first laser treatment. Looking closely you can see her hip looks a bit like a football, with redness and swelling on each side of the incision area. She is a superstar during treatment even though the area is tender and wears her doggles with great pride! After a week of laser treatments the swelling is gone and very minimal redness remains. Stevie continued with a second week of laser treatments and two weeks after her first laser the hair regrowth is evident and the surgical incision site is totally healed.

While Stevie will continue with therapy to strengthen her leg, gain more range of motion
and get back to the business of being a growing puppy, her laser therapy has been instrumental in a more rapid rate of recovery. We look forward to watching her become an active adult with many adventures ahead. 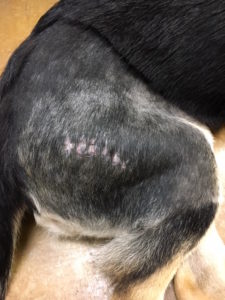 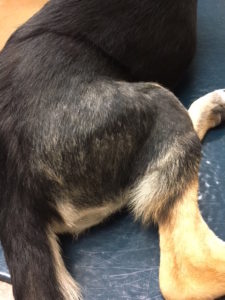