Skip to content
Home/Pet Health Care/Why Can’t She Keep Anything Down?

Why Can’t She Keep Anything Down?

Why Can’t She Keep Anything Down? 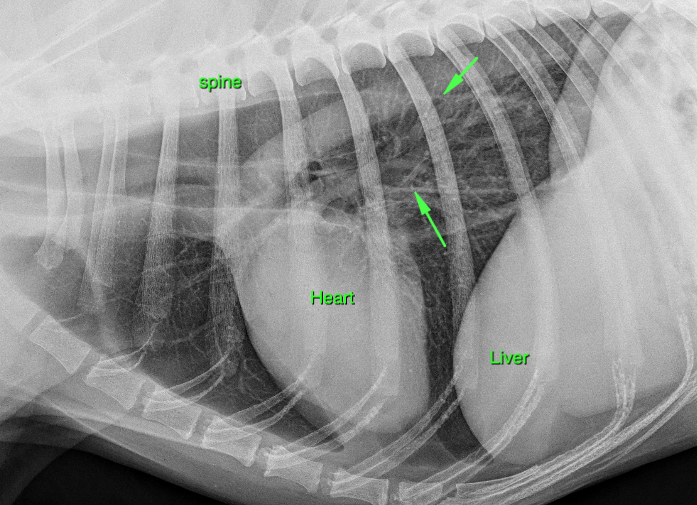 The arrows are pointing to the dilated esophagus.

On a Friday morning, Ellie’s people noticed she was vomiting a little bit. Since she was full of energy and still wanting to eat, we were not too worried. As a Golden Retriever, Ellie was known for eating socks, spilled food and other things that were not good for her. When she wasn’t better on Saturday, we became more concerned, and Ellie came in for radiographs.

Since Ellie’s “mom” mentioned that it sounded more like she was clearing her throat than actually vomiting, Dr. Markoff decided to take radiographs of her abdomen (her tummy) and also her chest and neck. The answer was in those chest x-rays – Ellie has a megaesophagus.

Megaesophagus means a dilated and limp esophagus. Normally our esophagus, which is the muscular tube used for swallowing, is very small and empty when we are not eating – no larger than a human thumb in diameter. Ellie’s esophagus was almost 3” wide and full of air. This happens when the normal muscular contractions in the esophagus become weak. Food gets stuck in the esophagus and is actually regurgitated rather than vomited out.

True vomiting means expulsion of stomach contents. It is usually preceded by a little drooling or swallowing, and then multiple heavings of the abdomen (we’ve all experienced that!) On the other hand, regurgitation is more sudden – food or water just seems to come out, sometimes rather forcefully but without much effort on the part of the dog. Both can be accompanied by a coughing kind of sound.

Megaesophagus in dogs can either be a disease of puppyhood or acquired later in life. When puppies have megaesophagus it is often doe to some abnormal anatomy in the chest and we see signs as soon as they start to eat more solid foods. The acquired form can come from a muscle disease called myasthenia gravis, can be secondary to damage to the esophagus or can be an unusual aspect of several systemic diseases. Most cases, however, are what we call idiopathic – we don’t know the cause.

Management of megaesophagus can be very difficult. Medications are used to treat any known causes and to help with muscle contractions, prevent ulcers and manage acid reflux. The biggest issue is getting adequate food and water into the patient. Some dogs can swallow water fine, but have trouble with food. In these cases, we can feed milkshake consistency diets and do very well. Ellie seems to be doing fine with food, but us having trouble with water. Other dogs can’t manage anything. In these cases, we need to provide food and water only when the dog is vertical – upright like a person. This allows gravity to pull the food and water into the stomach. Most patients need to stay upright for 15-30 minutes after any food or water. Little dogs can be held in baby carriers, but big dogs like Ellie present a bigger problem. All sorts of interesting contraptions have been developed to help feed these guys. Dr. Markoff built a special “throne” for Ellie where she is pampered into a vertical position and hand fed each meal!

We are happy to report that Ellie is doing great and her family is adapting to her new feeding regimen quite nicely. We expect her to do well for a very long time.