Many of you may know that I traveled to Louisville, Kentucky the last week of October to be with the SLO High FFA Vet Science team-Amber Bjerre, Hailey and Brynn Robella, Darcy Hummell, and Clare Backens- as they competed at the national competition. They had won the state championship back in May, and we had been working very hard to prepare for the national competition which was much more involved and intense than the state level competition. I have been working with this group of girls for two years, and have become quite close with this amazing group of high school juniors. What an honor to travel with them to the FFA National Convention! In addition to the 5 members of the vet science team, we were traveling with several other state champion team members from other competitions from SLO High, their advisors, principal, and some parents.  It is quite the experience to travel with such a large group. I had never played team sports or done something like FFA when I was a kid, so this was such a neat experience to be part of something so big and great! For those of you who don’t know much about FFA or the things they compete in, look for a separate article to come, as I want to make sure everyone knows what these talented young kids are involved in! 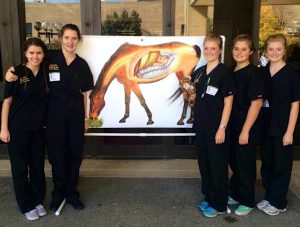 At the beginning of the week, we spent a lot of time studying and rehearsing the group presentation about equine colic that the team was going to have to give on Thursday.  We took advantage of anywhere we could find to practice and study- whether was in the breakfast area of the hotel, the restaurant in a hotel that wasn’t open yet, or a hotel room. The thought was to use any space until we were told that we had to leave! Their dedication to be prepared was admirable. The Vet Science Team started to compete on Wednesday- they spent several hours on individual exams-everything from identifying surgical instruments and parasites, to medical math questions, short essays, and general knowledge of all aspects of the veterinary profession (including fish!) On Thursday, they gave their team presentation and then individually demonstrated practical veterinary nursing skills. These girls competed against 40 other teams from across the country. Their advisor, Anna Bates, our team alternate, Clare Backens, and myself waited nervously each day for the team to finish their competitions. It was so nerve racking waiting to hear how they thought each part went!  They were done competing on Thursday; we had an agonizing wait until Friday night to hear the results!

We attended a banquet Friday night with all the other teams competing in the veterinary science competition. It was a nail biting wait as they announced the bronze, silver and gold teams, before finally getting to the top 10 teams. As the states got called off, the anticipation from our table steadily grew…by the time the second place team was called, and it wasn’t us, our whole table was in tears of excitement, as we knew this meant we would be announced as National Champions! In addition, we had the first (Amber Bjerre) and ninth (Brynn Robella) place individuals, the first place in clinical skills (Amber Bjerre), and two students in the top 25 (Hailey Robella and Darcy Hummell). 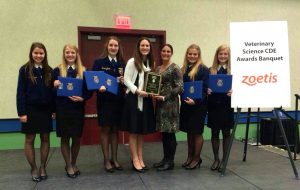 I cannot even begin to describe the feeling of being part of this experience with these students; it is unlike anything I have ever experienced. Mentoring them and playing a part in their success has been one of the highlights of my career. They put in so many hours of hard work and were so dedicated to this competition. They are amazing public speakers, so mature and poised for their age, and have such bright futures ahead of them, whether they pursue veterinary medicine or not. I could not be more proud of them, and what they have accomplished as a team- one of the greatest thing about them was to watch them leverage each other’s strengths and weaknesses to bring up the whole group to an even greater level. This group is very bonded and its now hard to imagine each week without my time spent helping them to prepare! We will all be on cloud 9 for a while to say the least and will always have fond memories of this experience.