Time To Say Goodbye: In Memory Of Slink Part II

Time To Say Goodbye: In Memory Of Slink Part II 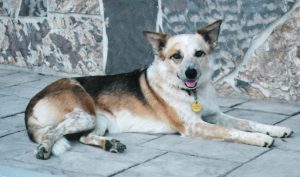 A good friend and fellow veterinarian gave me some advice to write down my memories of Slink. I thought that sharing them with those who have been reading about her over the years seemed like an appropriate tribute to her life and death. In a way, it’s like a eulogy.

My first year out of the Cal Poly dorms, I was ready to get a pet. I got a rabbit, and she lived in the house and was potty trained and it was great to have a pet around. But it just wasn’t a substitute for a dog, so I set out looking for a dog to adopt. I wanted an Australian Cattle Dog (also called a Queensland Heeler), because I had left the family one at home when I went off to college and was in love with the breed. I went to Animal Services in November of 1999, but didn’t see any there that day. As I was leaving, I noticed a sign on the door of the isolation ward that said there was a 1- year old, red, female, Queensland Heeler Cross named Dolly inside. I asked someone why she was in isolation and they couldn’t give me any information, but asked me to write down my contact information.

Several days later, I received a phone call from someone asking if I was interested in adopting a puppy. I was confused, because I had only written down my name for the 1 year old dog, so when I told the person on the other end of the phone this, we finally realized that this 1 year old dog I was interested in was the mother of a litter of puppies, which is why she was in isolation to begin with. She was lucky enough to have been put in foster care, and the foster mom told me her story. She was dropped off in the middle of the night at Animal Services, and just a few days later had puppies. Ironically, Stephanie Ruggerone, the practice manager at Animal Care Clinic, was at that time the head of Animal Services. She later told me that right after Dolly had her puppies, she went in to look them all over to make sure they were healthy and to decide the fate of her and the puppies. She said that Dolly was one of the kindest, sweetest mom’s she’d met-she let her handle each puppy and was just starved for attention herself. She knew she needed to get her into foster care and give her and her puppies the best chance of adoption.

So, I met Dolly that day- a dog barely out of puppy hood herself, nursing a litter of puppies. She was shy and insecure, but she crawled right into my lap and I knew I had to have her. I took her home a few days later, when her puppies were ready to go to their new homes, too. The first car ride was unforgettable. Stressed that she had left her puppies behind, she bounced all around my large suburban, finally settling on the floorboard just behind the passenger seat. For the rest of her life, this is where she preferred to ride in the car. When I had a small single cab truck, she preferred the floorboard to the seat, even on our long trips to Washington and back.

It took a lot of time and socializing to bring her out of her shell with people and other dogs. It took her time to learn how to play and how to trust. But once she did, she was the most loyal companion I could ask for. Dolly just didn’t seem like the right name for her. Her shyness led her to like to “slink” around when she first met someone. I happened to love the movie Toy Story, and the Slinky Dog character, and hence, she became Slink. Over the years I’ve collected a lot of Slinky dog paraphernalia that adorns my house. The happy cartoon dog, much like its namesake, could make anyone smile. 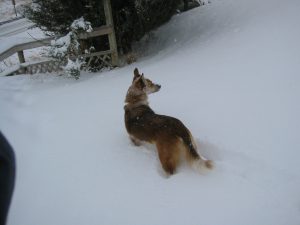 Slink and I spent two weeks shy of 15 years together. In that time, we lived in 8 different houses in 4 different cities spanning two states, spent time house sitting at countless others, traveled to and from Washington many times while I was in vet school, and all along the way made countless human and animal friends. Whenever we were pet sitting for someone at their house, she’d always make sure she knew where my stuff was, and make herself comfortable next to it, feeling safe wherever we were, as long as we stayed together. We had many housemates (dog and human) that quickly became friends, and friends that loved to pet sit in my absence, winning over almost anyone who spent time with her. In fact, Slink had even been to a state I’ve never been, when she traveled with a vet school classmate to his home town in Montana while he was watching her for me.

Slink got along with most dogs she met. We opened our home to many foster dogs while at vet school. Several cancer patients stayed with us while they were getting radiation, and Slink was eager to make sure they got out to have fun when they weren’t getting their treatments. We had several Australian Cattle Dogs stay with us while they were looking for their forever homes, and she taught them the ropes and how to be good dogs. And over the years she mentored many puppies, but most importantly she became my younger dog, Mico’s, best friend and teacher. She took to him instantly, and raised him like he was her own. I didn’t know raising a puppy could be so easy, but I think it’s because Slink was there to teach him how to be a good dog like her. When he was a puppy, if Slink moved, Mico moved. He always had to be laying down touching her. They were inseparable. I am grateful for the legacy she left me in Mico. Mico had never been alone in his 7 years, so the loss of Slink has been very difficult for him as well.

Slink and I spent many hours on the trails wherever we lived-either hiking or her accompanying me on my horse back rides. One of my favorite memories of her is the first time she went riding with me down near where I grew up in Whittier. We had to cross the water, and she had obviously never swum before. She didn’t want to go in, but she also didn’t want to be left behind. After looking around for any other option to get around the water, she finally jumped in and swam, and since that day never hesitated to enjoy a swim! She loved to chase things on the trails and sometimes would be gone for what seemed like forever, but would always show up just around the corner, looking like she was very proud of her great chasing skills. She caught a squirrel once, but it proceeded to bite her in the lip, so she let go! She loved the beach and lakes-she loved to use her herding skill to keep birds off the beach or the shore. She also learned to love the snow when we lived in Washington. Some of my favorite pictures and memories are of her playing in the snow! 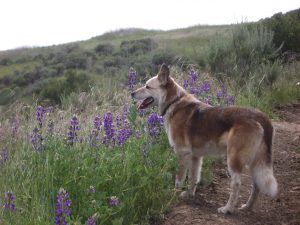 When you have a dog you got when you were only 19, and you are together for 15 years, a lot of life passes you both by. I can’t remember my adult life without Slink. Slink was by my side constantly, through all the ups and downs of life over those years. She put me through some scares herself- getting kicked by a horse and having to have a lot of subsequent dental work throughout the years, having issues with her eyes, and eventually the aging process. Overall she was a healthy, and very active dog, whi
ch I am grateful for. As she aged, there were times I know that it was harder on me than her, but she’d still comfort me with her happy face and a tail wag.

In vet school we are taught to consider all of our patients and animals that contribute to our education as our teachers. And Slink, without a doubt, was a teacher for many. She taught vet students, high school students, and Animal Care Clinic employees many things; from animal handling and restraint, to how to draw blood, put in catheters, put on bandages, and do physical exams. And even in the process of letting her go, she had lessons to teach me. She was my friend and teacher, and will be missed daily and never replaced or forgotten. I will forever be grateful that Stephanie met Slink and her puppies that day at the shelter, so that Slink could later become my greatest companion to see me through the last 15 years. Thank you for all that you taught me, my sweet Slink.